Welcome to Joanna Campbell, who explains one of the strands of her perceptive new novel, Tying Down The Lion. As a student she lived in West Germany, where she observed the collective guilt felt by so many after two world wars. More recently, German people are confronting these difficult feelings with the TV drama, Generation War becoming a ratings sensation there. Here, Joanna talks about some of her experiences during her time in Germany. 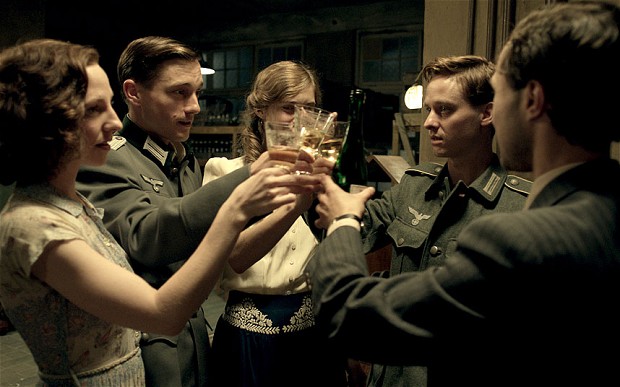 Shortly before the Bishops’ road trip to Berlin in Tying Down The Lion, a book was written by Hannah Vogt and published in Germany. It was called The Burden of Guilt - A short history of Germany 1914-1945, and within two years it had sold 400,000 copies.

This book was designed to educate the younger generation, but its title reveals something deeper and more poignant than a purely objective account of the rise of the Third Reich. Haunted either by the part they had played, or by association with those who had participated in the atrocities, guilt encumbered the post-war German generation.

I lived in West Germany for a year in 1980/81 and discovered that those who could still see blood on their hands struggled to balance their load of responsibility with a normal life. One of my fellow bed-sit dwellers, Konnie, was a docker in Hamburg. At four in the morning, I would wake to hear his heavy tread on the stairs and his deep sigh at the prospect of another day that would bring only self-loathing and sorrow. The bannisters trembled under his huge hands, which shook as the result of constant drinking. After the day’s work, he would sit, exhausted, in his room, open his bottles and beg me to join him. And every evening he would tell me about the shame he would always carry—a shame that is shared by Roy Bishop—for the part he played in WWII.

When Konnie had to kill a fresh-faced Russian soldier, a boy even younger than himself, he felt the weight of the obligation to fulfil his military duty. But before he pulled the trigger, he hesitated.

In Tying Down The Lion, the same memory—although this time of course, he is faced with a young German soldier— blights the life of Englishman Roy Bishop.

Roy, however, bears none of the subsequent burden of collective guilt. His country did not instigate the war or the Holocaust. He suffers his own personal depression, as well as horrific nightmares in which he cries out to the young soldier he had to kill point-blank, but he is not further diminished by collective responsibility in a country where, post-war, the Allies stimulated German shame with posters showing the horror of the concentration camps and bearing slogans such as, "These disgraceful deeds: your fault."

It was not only the soldiers who suffered. Ordinary citizens believed they had turned a blind eye to the brutalities as Jewish friends and neighbours were taken to the death camps. In Tying Down The Lion, the West German character, Beate—who, like my friend Konnie—drinks to delete her memories, says:

“Germans will never know peace, not in our heads. Twenty thousand Berliners helped the Jews. Not many out of four million…And [we] are now too ashamed to speak of the bravery of those twenty thousand people. If we do, it means admitting we had the same choice and ignored it. And that is our guilt, to be carried for the rest of our lives.”

At the end of the war, it was difficult for those who felt they had contributed to Hitler’s tyranny to feel liberated from it. Konnie was frightened to talk about the war years to his young son. The continued pressure of the past, along with his drinking, had swiftly ended his marriage and brought him to the bed-sit where he drank all night and told me, in precisely the same words every time, about the young Russian he had killed. With his ex-wife and child living in the eastern half of the country, the building of the Berlin Wall also terminated his chances of seeing his son again.

Despite his private terrors, Roy Bishop is able to set his sights on the future. The road ahead holds no fear, no shame. It is only there—in what lies before him—that he truly feels content, set free from his demons. Although he suffers from the heavy load of his past, he does not bear the same cross of collective guilt. But for many of the post-war generation of Germans, the lasting shame was a tenacious beast, offering no hope, no happiness, no new horizons.

The new generation of Germans accept they have no personal culpability, but are aware they must continue to learn about the Third Reich and the Holocaust in school, knowing there must be no attempt to repress the truth if there is to be any hope of avoiding its repetition. Every year, students are taken to visit Auschwitz, where they confront the inescapable fact that they can do nothing to change their history, but, for the sake of their future, should never forget it.

Joanna Campbell is well-known for her prizewinning short stories.

Tying Down The Lion is her first novel, which has received glowing reviews with "its blend of seriousness and spirited humour." Rouchswalwe

Copies are available for purchase in Kindle and in paperback.